Thanks to Chris Oliphant of the District of Columbia Fire Department (owner of a 1968 Mack CF-600 Semi-Open Cab, and a 1974 Mack CF-700) for dragging me along to a ham radio convention in Richmond, VA.  The radio flea market afforded me the opportunity to purchase a vintage Motorola speaker and two old school Motorola microphones.  I located a Motorola Motrac control head on E-Bay, and a non-working, period correct, radio was assembled and ready to be installed in the engine.

The remaining hose reel had about 100 feet of some old booster hose that was nasty looking and dry-rotted.  It did have old school booster hose couplings, that a compact hole spanner wrench would be needed to couple and uncouple the hose.  I pulled some line off the reel and discovered that the chain driven mechanism still moved.  Touching the hose turned my hands red, and something that I imagine was water at some point, came out of the line.  As much as it goes against my belief that fire equipment should never be thrown out, the hose wound up in the dumpster. 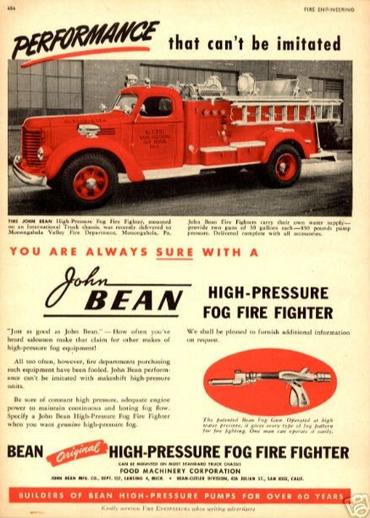 When the engine came out of the factory it had two reels of booster line, each holding 150 feet of hose.  It also had a 225-gallon booster tank, connected to a 100 gallon-per-minute, high pressure pump.  The use of John Bean pumps, which ran at 800 pounds per-square-inch (psi) at the pump and 600 psi at the nozzle, predates World War II, when John Bean Company started making fire apparatus for the United States military.  At some point the Dodge had its booster tank size increased, the pump modified, and one of the hose reels eliminated.

I got lucky with the hunt for the high-pressure fog nozzles that would have been used with that pump.  Chief Bruce Evans and Deputy Chief Roy Vreeland at the Upper Pine Fire District had what I was looking for.  Roy had the one that came off the Dodge when it was at Upper Pine Fire, and Bruce had one that came off an engine that he had owned a few years ago.  A little horse trading took place, and I wound up with them both.

While I believe that this piece of fire apparatus should be returned to its original cream color, it is not going to be happening any time soon.  Operating on a limited budget and focusing on getting the vehicle road worthy will not allow me to paint it any time soon.  With that thought in mind, I had another idea.

I took photographs of the original Good Intent Fire Company 3 door lettering to Alert Signs in Bayfield, Colorado to see about magnetic signs.  Fredi Worth drew up a design that came close to replicating what the engine had when it came out of the factory.  Until I can do the paint some justice, the signs will provide somewhat of a stop-gap measure to honor where it came from.

The Return of the Fuel Tank

The good folks at Moyer Fuel Tank sent the restored gas tank back.  It went through quite the process and now has a lifetime warranty that the processed tank will not rust.  First, the tank was de-fumed in their oven until no flammable vapors are detected.  It was then thoroughly sandblasted inside and out.  The blasting cleaned the metal of any rust and created a rough profile on the tank to insure a good bond.

After the tank was cleaned and repaired, they started the process.  The first application of the material was applied and baked in the oven at 360⁰ F for six minutes.  The coating/baking process is repeated another two times to assure the sealing out of rust and corrosion.  As the tank was unpacked, it looked great.  While the process and shipping were not cheap, it was more cost effective that having a new tank fabricated.  It was reinstalled in the Dodge and will have the fuel lines reconnected soon. 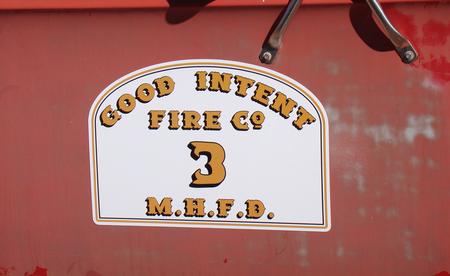 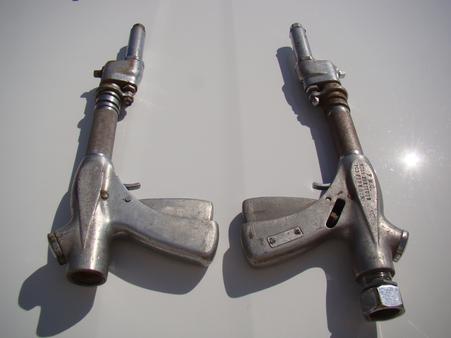