Back in 2014, I thought this would be a fun project, bringing Box 545 back to life. I picked up this gem from my friend Ira Rubin (may you rest-in-peace) from Jersey City, NJ. The box came out of the City of Bayonne, NJ and was located at the intersection of John F. Kennedy Boulevard West & West 37th Street. Thanks to Robert Disbrow at Bayonne Fire for locating the Run Card for the box and sending along a photo. 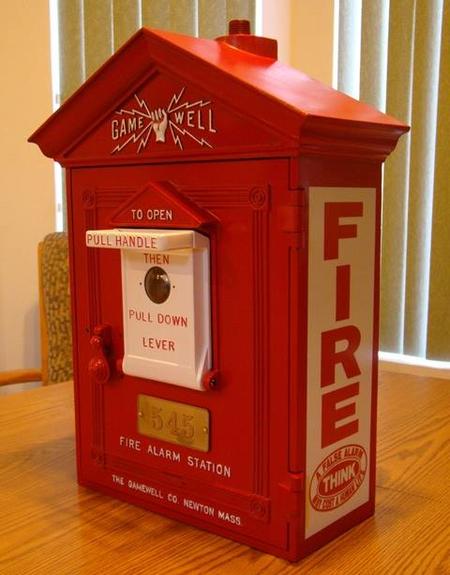 Thanks to E-Bay and Auto-Tech Fire Systems in Akron, OH I was able to locate a 1920’s style “Bull’s-Eye Lens Pull Guard Door” and the other parts to needed make the box original again. The “FIRE” stickers for the sides were provided by FireStickers.Net in Albuquerque, NM. A little “JB Weld” fixed the broken screw assembly, and some drilling and tapping got the torsion screw removed. 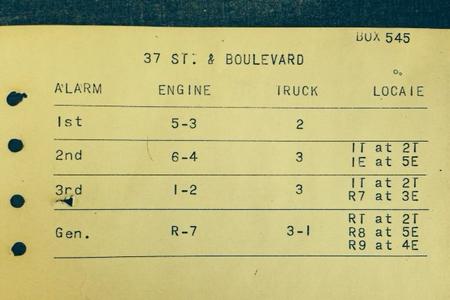 This restoration was not without its challenges. “Street Condition” does not even begin to describe what this thing looked like. It had seen years of various paint jobs, some that looked like it was done with a big brush and street paint. While the box is a 1920’s style, it had a 1950’s style “Pull Guard Door” on it. The screw assembly for the “Pull Down Lever” had been broken off at some point, and the “Pull Lever Trip Movement” for the internal mechanism was starting to fall apart. While I was getting ready to get a coat of primer on the box, I was removing the screw that holds the “Hinge Shaft” and “Torsion Spring” for the “Pull Guard Door,” and I snapped the head of the screw off.

I am indebted to Ira Rubin for selling me this piece of fire service history, oh so many years ago. Thanks again to Robert Disbrow for providing the box location. I am also grateful to Vince Lawing for his sandblasting skills, and to Tim Batchelor for showing me how a Tap & Dye Set works. The raised lettering on all the interior and exterior pieces were painted by Paul Edney, a gifted sign painter from Farmington, NM.