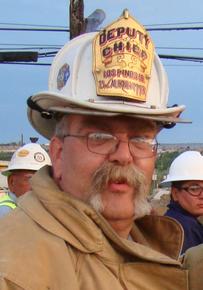 Thomas W. Aurnhammer is the retired Chief of the Los Pinos Fire Protection District; a combination department located in the scenic "Four Corners" of Colorado, New Mexico, Arizona, and Utah.  Chief Aurnhammer commenced his 43-year fire service career as a member of the Millburn (NJ) Fire Department and as an auxiliary member of the Newark (NJ) Fire Department.  In 1980 he moved to Farmington, NM after accepting a position as a career firefighter.  He has held the ranks of Firefighter, Fire Engineer, Fire Captain, Fire Marshal, and Fire Chief prior to his retirement from the FFD in 2003.  Tom is currently serving as an investigator with the San Juan County, NM Fire Department.

Aurnhammer completed the National Fire Academy's Executive Fire Officer Program (EFO) in 1992, graduated with honors from San Juan College in 1993 with an Associate Degree in Fire Protection, and graduated Summa Cum Laude from Columbia Southern University with a Bachelor of Science Degree in Fire Administration in 2016.  Tom received his Chief Fire Officer (CFO) designation from the Center for Public Safety Excellence’s Commission on Professional Credentialing in 2008.  He is a certified Emergency Medical Technician (EMT-B), a Blue Card Certified NIMS Type 4 & 5 Incident Commander, as well as a Certified Fire Investigator through the International Association of Arson Investigators (IAAI-CFI®).  Chief Aurnhammer is an Adjunct Faculty member at the National Fire Academy and San Juan College in Farmington, NM..

Aurnhammer has taught at numerous regional, state, national and international programs and academic institutions and is widely published in the national trade periodicals in the areas of fire investigation, safety, and the executive management of fire departments.  He has served as an alternate on the National Fire Protection Association’s (NPFA) Correlating Committee on Professional Qualifications and has also served on NFPA's Technical Committee on Fire Investigations (NFPA 921) from 1990 until 1998.  Aurnhammer holds memberships in the IAAI, IAFC, the Executive Fire Officers Section of the IAFC, and serves on the board of National Fire Academy Alumni Association.  He was also granted the grade of Member in the Institution of Fire Engineers (MIFireE) in 2008.

Chief Aurnhammer, along with his brother Don, represents the fifth generation of their family's involvement in the fire service.  He is married to Lori, and has two children, Robert and Shaylee, as well as an extremely neurotic Labrador Retriever.